The power of habits is undeniable, they can propel you to stardom or kill you. The sum of our habits determines the quality of our lives.

So many people suffer from bad habits that sabotage their chances of success. Bad habits make achieving your goals feel impossible.

If you’ve felt this self-sabotage in your own life don’t worry, you’re not alone. Often times people try to drop habits by depending on willpower. But willpower doesn’t last.

Instead, you need to learn how to replace your habits and learn about willpower to start making the necessary changes you want in life.

“This is how willpower becomes a habit: by choosing a certain behavior ahead of time, and then following that routine when an inflection point arrives.” – Charles Duhigg – Power of Habits

Willpower can’t always be trusted. To eliminate willpower, plan the next day the night before to make your decisions easy. Ask yourself, what will you eat? When will you workout?

Use a journal to plan your day in advance and see where your willpower might be tested. If you have a routine it’s so much easier to follow than trying to “wing it.” 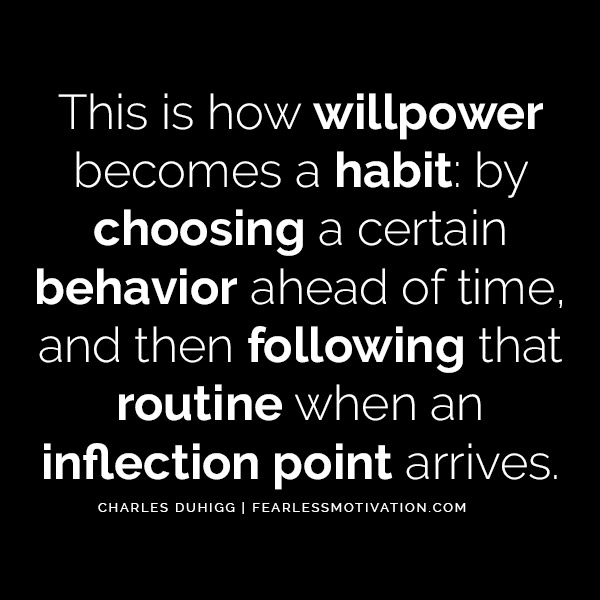 “As people strengthened their willpower muscles in one part of their lives—in the gym, or a money management program—that strength spilled over into what they ate or how hard they worked. Once willpower became stronger, it touched everything.” – Charles Duhigg – Power of Habits

Willpower is a muscle and can absolutely spill over into other areas of your life.

Fitness is a great example. If you start exercising and eating right it can help lead to more discipline with your finances or in your business. Don’t ever forget the power of willpower and discipline to help you achieve your dreams. And probaly help change your life!

“Small wins are a steady application of a small advantage.” – Charles Duhigg – Power of Habits

Celebrate all your wins — big or small — to help you stay motivated. This behavior will keep you motivated to keep achieving more than ever. 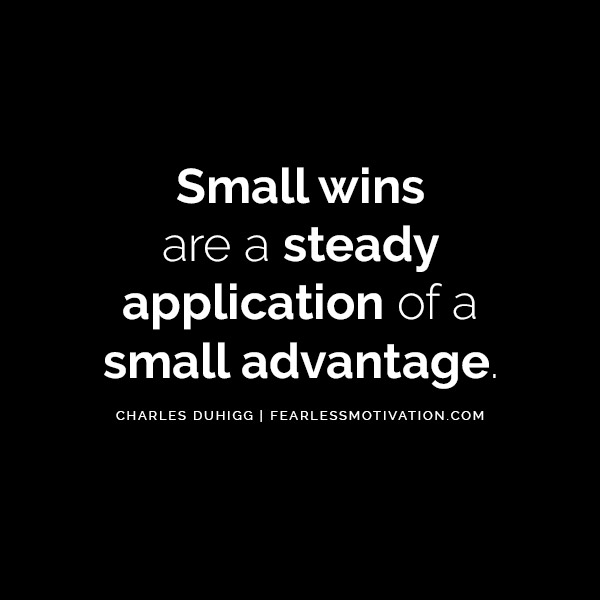 “Willpower isn’t just a skill. It’s a muscle, like the muscles in your arms or legs, and it gets tired as it works harder, so there’s less power left over for other things.” – Charles Duhigg – Power of Habits

Once you understand that willpower is a muscle and gets tired like everything else, you can start setting yourself up for success. Minimize using your willpower muscle early in the day so you still have discipline later in the day.

“Champions don’t do extraordinary things. They do ordinary things, but they do them without thinking, too fast for the other team to react. They follow the habits they’ve learned.” – Charles Duhigg – Power of Habits

Your habits are the reason you are where you are in life. Your fitness, income, and happiness are all related to the habits you practice each day. 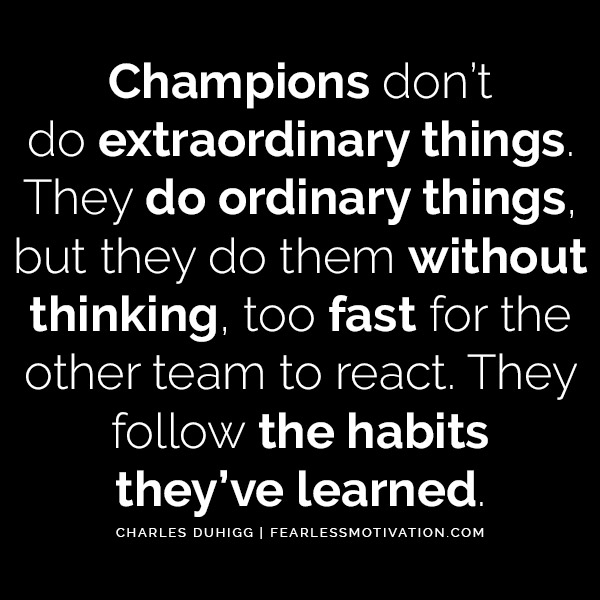 “The Golden Rule of Habit Change: You can’t extinguish a bad habit, you can only change it.” – Charles Duhigg – Power of Habits

How many times have you tried to drop a bad habit only to fail a day or two later? Don’t worry, you’re not alone. Instead of dropping bad habits, you need to replace them!

If you’re trying to quit smoking instead of reaching for cigarette chew gum or go for a run. Do something new that replaces the bad habit you are trying to change.

“Change might not be fast and it isn’t always easy. But with time and effort, almost any habit can be reshaped.” – Charles Duhigg – Power of Habits

Habits aren’t supposed to be easy to drop. They can take time, usually 21-35 days or more to become unconscious.

New studies have also found some of your worst (and longer) bad habits can take up to 100 days to reprogram. Stay patient and trust the process!

Use these power of habit quotes to take action and start replacing your bad habits. Remember, willpower is a muscle. Like all muscles, it gets fatigued but can also be strengthened.